Ticket for the UN climate summit 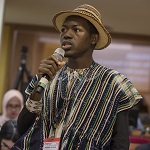 DAAD scholarship holder Desmond Alugnoa was lucky. The climate activist from Ghana was one of 100 young people who received a highly sought-after green ticket for the UN climate summit in New York. In the interview he tells us what insights he took with him from the conference and how he experienced Greta Thunberg’s speech.

I grew up in a very rural area in the northeast of Ghana. When I was young, one of my tasks was to look after my father’s cattle. This enhanced my environmental awareness. As a high school student I observed how the vegetation changed. The pastures where I used to lead the cattle became desert. But environmental issues weren’t a subject in school. I wanted to understand more, so I finally decided to study environmental science at the University of Cape Coast. There I formed a group with others. We organised clean-up campaigns on the beaches of surrounding communities and showed people how to recycle waste. That activism shaped me. Now I am a waste entrepreneur in West Africa, committed to changing the widespread perception that waste is nothing but rubbish. We should regard waste as a resource.

Now you were at the climate summit. How did you manage that? 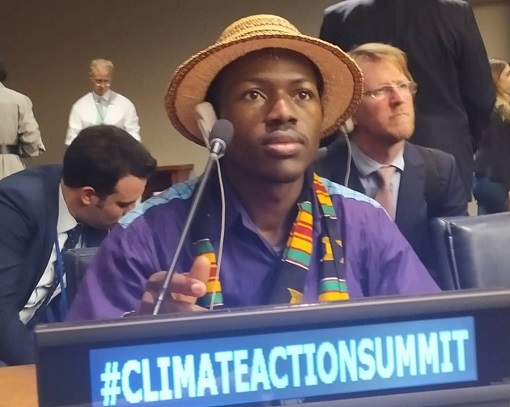 The green tickets were given to young people who are committed to fighting the climate crisis. After graduating in Ghana, I founded the Green African Youth Organization (GAYO) with a colleague. We work in the areas of environmental sustainability and community development, focusing on groups that are particularly threatened by climate change. Our commitment is highly appreciated in Ghana. In addition, the UN-Major Group for Children and Youth (UN-MGCY) has appointed me as contact person for the Rural Economies sector. All this probably helped me to get a green ticket, for which I am very grateful.

What was it like to take part in such a historic event?

Taking part in the world’s most important climate conference was a powerful experience. Among other things, I had the opportunity to lead a panel discussion on the “Future of Waste Management in the Global South” – participants from Vietnam, Ghana, Japan and Thailand reported on their initiatives. As a waste entrepreneur, it was exciting for me to get to know best practice models from other countries. I was also able to network with activists whom I probably never would have met otherwise.

I particularly liked the fact that young people were really listened to in New York. There were sessions where only young voices were heard with the Secretary-General as the main listener. Much of what I learned at the conference can be applied to my studies. I’m currently studying Public Management at the University of Potsdam as part of the Helmut Schmidt Programme.

How did you experience Greta Thunberg’s now famous speech?

Her speech was good because it addressed many important issues. I admire Greta’s directness towards the powerful of this world. However, I’m critical of the emotional way she spoke. In my experience, rational arguments are the better way to convince people. They are more effective than making people feel that you are against everything they stand for.