“Barriers melt away when people start working together” 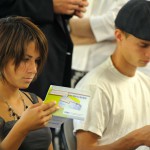 They have different areas of expertise, different cultural backgrounds and often, the relationship between politics, science and praxis in their home countries differ drastically from one another. And there are many hurdles. But during the Millennium Express’ workshop stop in Berlin in May, its participants – some 50 German and Arab DAAD scholarship students enrolled in bi-cultural Masters programmes – learned one important thing: Working together towards a common goal can generate enough power to break through these barriers.

There are many opportunities and good ideas for development in the areas of water, energy, economics and education. But what’s the best way to put these ideas into action? With good connections based on good communication. To gain insight into the political life of a project – from planning and decision-making stages to final implementation – the DAAD scholarship holders visited a number of expert committees and ministries located in Berlin and spoke directly with members of parliament.

“I was really impressed by our visit to Germany’s Federal Ministry for Development,” said Syrer Ramez Muhjeh, a student in the German-Arab “Economic Change” Masters programme at the Universities of Marburg and Damascus. In his country engaging politicians and high-level civil servants in direct exchange is not possible: “I now know what’s possible, and I’ve set a clear goal.” 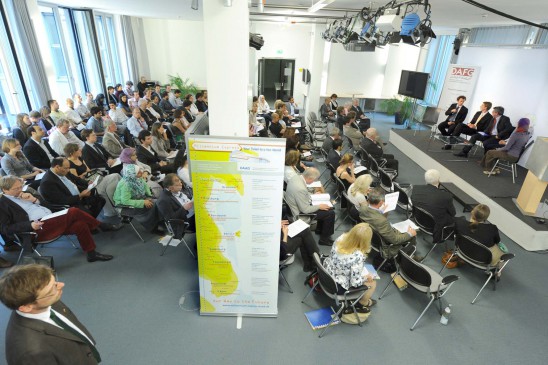 The parliamentary evening held at the German Institute for Economic Research (DIW) also awed participants, students, diplomats and politicians alike. The Islamic Studies professor Gudrun Krämer gave an astute appraisal of the current political events unfolding in many of the world’s Arab countries from a German perspective. “I am amazed at how well she knows her way around the different situations in the Arab region,” said Salma Bakr, who comes from Egypt. She studies “Renewable Energies and Energy Efficiency in the MENA Region” at the Universities of Cairo and Kassel. Communication would improve if everyone involved is well informed and open to one another.

The week in Berlin also got the students from the four German-Arab Masters programmes thinking about creating networks of their own and launching interdisciplinary and cross-cultural partnerships and projects. “It never ceases to amaze me just how quickly German and Arab students seem to click. Barriers just seem to melt away when people start working together,” says the Egyptian student Rana Yacoub, who is enrolled in the “Economic Change” Masters programme.

All Arabs are not alike

Small group work allowed students to get to know each other. Each of the four bi-cultural graduate programmes is made up of German students and post-graduate students from different Arab nations. “Differences abound not only between German and Arab students, but between the different Arab regions as well,” emphasised Noha Saad, a DAAD scholarship holder from Egypt enrolled in the “Renewable Energies and Energy Efficiency in the MENA Region” programme at the Universities of Cairo and Kassel. Non-stop exchange and the temporary intercultural living accommodations are a great way to jump-start a successful career in development co-operation. “When it comes to water, energy or the economy, Germany is not the only country we’ll have to forge partnerships with,” says Noha Saad. 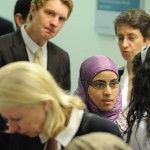 The German students also learned a lot in their exchanges with their Arab counterparts. “Germans who go to Arab countries learn to become more patient and flexible when things don’t work out immediately,” observes Ramez Muhjeh, who comes from Syria. Personal cultures change and people start to become more open and accessible to one another for professional collaboration – this is the most valuable aspect of reaching common goals together.

Modernity demands reflexivity and critical thinking, says Islamic Studies expert Gudrun Krämer during the parliamentary evening event. How to go about establishing this as the norm is up to individual people and societies. Addressing the scholarship holders, she added: “People who have these skills and experiences are desperately needed – and you have those qualifications.”