The People’s Climate March: It takes roots to weather the storm

Almost two weeks ago I had the privilege of taking part in the People’s Climate March, the biggest climate mobilisation event in history. About 400,000 people took to New York’s streets fighting for climate justice and clean energy, demanding that governments leave fossil fuels in the ground in order to guarantee a better world for everyone. It took over five hours before the last groups started to march. More than 2,600 events were held in 162 countries around the world on the very same day. 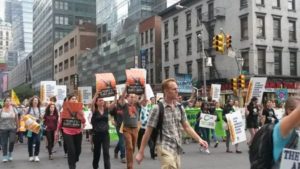 It was amazing to feel that great energy. I danced, I laughed, I screamed “El pueblo unido, jamás será vencido” (the people united will never be defeated). I got excited because I was there, sharing a great moment with thousands of people. Everyone marched: entire families, elderly people, indigenous people, teachers, students, universities, unions, teenagers, and representatives from countries – like mine – that are highly vulnerable to the effects of climate change.

The march was organised around the UN Climate Summit as a way to create momentum for the climate negotiations. During the summit, world leaders were supposed to present their pledges on issues such as emissions reductions and on financing measures for adaptation and mitigation. But in the aftermath of the march and the summit, several analysts say it didn’t happened, that there was very little progress made. While a few speeches talked about concrete commitments, only USD 2.3 billion were offered in total – the UN is hoping to raise at least U$ 15 billion by December this year.

The way I see it, even though the governments did not meet expectations, the people did. This is the most important step we have taken. We, the people from all around the world – and especially those from developing countries that are already struggling with the negative effects of climate change – are ready to take action. We thank those who demanded that governments and the private sector also take action. We thank those who fight day by day with actions for a better world…and not just with words.