Buying souvenirs in Nepal and Switzerland

It has been almost one and a half years since I returned home to Nicaragua. My Master’s program in Germany and my current job have allowed me to meet many new people from different backgrounds, and to travel to new countries. For me it is always amazing to learn about different cultures and countries. 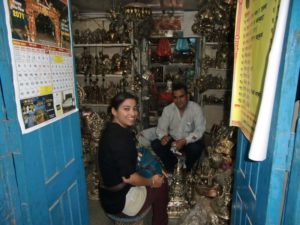 Last April, for example, I went to Nepal for a work-related workshop and to take part in an international conference on adapting to climate change. The Nepalese people amazed me. Even though they often lacked basic things, the people smiled at me very often. In the rural communities we visited they received us with joy, dancing and offering meals and drinks. The little they had, they shared it with us. I loved to buy souvenirs for my family and friends there because they were very nice and very moderately priced (even compared to Nicaragua).

Then, last February, I went to Switzerland (also for work) to attend the intersessional meeting of the United Nations Convention on Climate Change. I didn’t have the chance travel and experience more than Geneva, but could see that the landscape, as in Nepal, was very impressive –the lake, the view of the Alps and the architecture – and although the people didn’t smile much, they were kind. But I was truly shocked by the high cost of living in Switzerland – the very high prices for meals, chocolates, and everything else. I say this not only comparing to Nicaraguan standards, but also to German standards. In the meetings, during the breaks or during lunch I heard many people complaining about the prices. It was simply not affordable to tour the city, drink a nice coffee or buy something to bring home. The nice and very traditional chocolates, for example, were far too expensive. 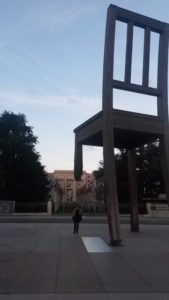 Impressive: the Broken Chair on the Place de Nations in Geneva © Private

For me, the visit to Switzerland confirmed how inefficient and unfair the distribution of the resources is. While in Nepal you could easily buy a nice souvenir with one dollar, in Switzerland I needed ten dollars to buy a souvenir (the cheapest one). The comparison between these two countries could also be made within the countries. In many of them the increase in GDP only means that the rich people are getting richer and the poorest are getting poorer.

How can we solve this unfairness? How can we guarantee that every single person on this planet has his/her basic needs covered? The answer is complicated and this year our governments are trying to reach two important agreements related to human and sustainable development which could help put us on the right track: the Post 2015 agenda, which currently consists of seventeen objectives, and the new climate agreement designed to tackle the climate crisis which many countries already face. We as citizens should demand of our governments that they ensure the well being of everyone, including the generations to come. And we should also try to be part of those processes and to propose alternatives. As the saying goes: governments are the reflection of the people they govern.