Development cooperation has always been, ideally, about partnerships between those who need help and those who can give help – whether in the form of financial aid, technical assistance or even linking networks. I’m thankful to have a chance to work in the field of development effectiveness, which is essentially the area that checks whether the intended outcomes of development cooperation in a given sector or thematic area have been achieved, and if not, why not. But it was not until I had a chance to live in Cape Town, South Africa, and Hamburg, Germany (thanks to DAAD!) that I realized that I have an insatiable appreciation for cities that engender work-life balance (valuing this makes me realize I’m really getting older) and an absolute disdain for cities that are barely thriving because of many hindrances to improvement.

Of course, I could have stayed in Geneva, Switzerland, which was my last “duty station” as a DAAD scholar or returned to Germany, where foreign graduates of a German degree are entitled to a “job search visa” for 18 months. I could have worked in an environment of urban convenience with absolute proximity to nature. I could be living in a city that already has the necessary urban infrastructure in place, and far from the Pacific Ring of Fire, which makes countries like the Philippines, vulnerable to earthquakes along with the 20+ typhoons we endure every year. 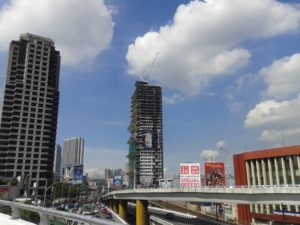 Big challenge for megacitys like Manila: establishing a functional and sustainable infrastructure © private

But after completing my graduate thesis on financing urban infrastructure, I’m back home and part of a team looking into how urban infrastructure has benefitted from climate finance. One of the things I like about the urban sector is that it affects everyone – rich or poor, healthy or not, educated or not. We all get stuck in traffic, get inconvenienced by floods, have to travel far for a better hospital and some even have to rent extra flats for school or work because it takes so much effort to get anywhere in Manila. But other secondary cities in the Philippines have similar urban issues of varying scales. Business-as-usual in Manila is sub-optimal and if you add the effects of climate change, conditions will be even worse even within a decade from now. We’re in for some problematic times.

So here I am back in my home country, openly hoping that countries like the Philippines, despite its admirable economic growth, will make it easier to channel financing for climate-resilient urban infrastructure or at least reduce the institutional (and political) impediments. There are, after all, funds dedicated to battling climate change, and these can be utilized to make life in megacities more than just bearable but even sustainable.
This, unfortunately, is easier said than done. 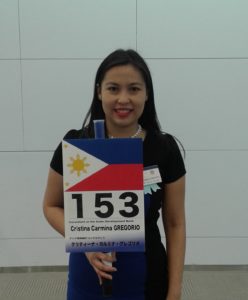 Gaining new insights in Tokyo: At an international summit of young leaders I represented the Asian Development Bank © private

Recently I was at an international summit of young leaders in Tokyo, Japan where we had an audience with the foreign minister, the governor of Tokyo, and other notable Japanese – a chance to learn about the shift in their Official Development Assistance (ODA) Charter to a “Development Cooperation” Charter. Aside from the renewed emphasis on partnerships in development (public and private sector most especially) and ensuring the interests of the “bottom half,” it was about going beyond their traditional provision of infrastructure and expanding to “export technology” (such as early warning systems), and increasing support for climate-resilience in developing countries.

The governor of Tokyo shared his sustainability plans for the city (cars running on hydropower which could serve as emergency energy sources in the event of a power outage during an earthquake, for example ) and was proud to report that, thanks to an efficient public transport system, there is no traffic in Tokyo’s streets despite being a megacity. I actually experienced two earthquakes while in Tokyo. Despite all the shaking, everything was back to normal after a short time (even earthquakes are apparently normal).  It would be a dream scenario for the Philippines to have disaster-resilient urban infrastructure.

Now blogging back home, it is always amusing when matters of local development become matters of international relations thanks to development cooperation.  Japan is the highest ODA contributor to the Philippines, while Germany is a prominent global leader in climate change initiatives.  Provision of urban infrastructure may be a local matter but addressing issues of climate change resilience is not. For established practitioners, this is old news. But for young professionals like me, my contribution to this field is just beginning. I may miss the perks of urban life in Europe (and now I admire Japan too) but, at the same time, it’s a good time to be in the Philippines and walk the talk. I hope I continue to get the chance to do so!