“Auf Wiedersehen” is how Anke Stahl says goodbye each year to graduates of the Development-Related Postgraduate Courses programme before they return to their home countries. This time it is the other way around: “Auf Wiedersehen, Anke Stahl!” The long-time head of the Development-Related Postgraduate Courses Department will be moving to Vietnam, where she will head DAAD’s Regional Office in Hanoi as of August 2013. We asked Ms. Stahl to give us a recap of the last several years and a brief look at what’s next. 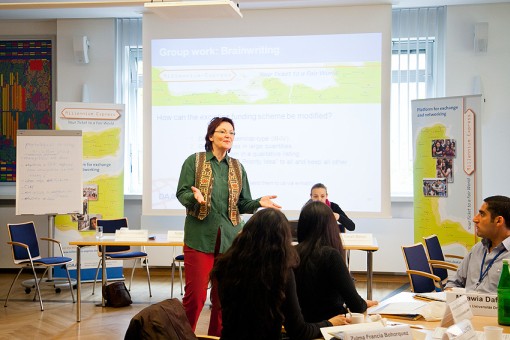 When you became head of the DAAD department in 2006, it was only half its current size. The number of postgraduate degree programmes has also grown considerably since then.  What were the important contributors to this dynamic growth?
Most definitely the bi-cultural Master’s programmes. This is an innovative model based on the extensive experience gained through the traditional postgraduate courses. Shortly after their introduction between 2006 and 2010, these new programmes began having a positive impact on the postgraduate programmes as well.  Both programmes profit from each other; synergies can be found across the full spectrum of our work. Our networking approach plays a very important role here.

Is your department a trend setter?
With our cross-border degree programmes we really are quite far ahead of other programmes around the world. The approach is quite unique, with the German and foreign participants completing the entire course of study together at the various partner universities.  Our model certainly has a bright future.
Along with advancing their studies, the students learn a lot about intercultural communication, and they become more open and more sensitive to different perspectives and values. This has also had a big influence on me and my team over the years – it was enriching and a great motivator. And it has made us all the more authentic in our work with the scholarship holders and helped to give them the encouragement and support that they need.

For example?
Thanks to the continuous financial support from the Federal Ministry for Economic Cooperation and Development we are able to provide the students with considerably more than usual.  We are constantly improving and expanding our offerings with new formats, such as our initiative to help prepare students early for the return to their home countries. This doesn’t just begin when they graduate and become alumni.  We begin building the bridge during the course of the programme. For two years now, reintegration into the home-country labour market has been a major area of focus.

Networking is considered one of the programme’s main goals. Has this succeeded so far?
Because I used to direct the Alumni Programmes Department, it was very important to me to bring the scholarship holders together with each other and with DAAD alumni. This kind of contact and exchange has done a lot to develop the network. A great example of this has been the interdisciplinary workshop series Millennium Express. The idea was introduced at the first scholarship holder networking event in 2009 and at the second meeting in 2010, the idea had already been developed further. By the fall of 2010, the two-year workshop series was launched and the scholarship holders were so successful in organising it, that the Millennium Express experiment has now established itself as an ideal platform for exchange and networking.

How can the network continue to grow?
It is our responsibility as the DAAD to bring together the suggestions and initiatives from the degree programmes, as well as the scholarship holders. In the future this will be the job of the inter-university Network Manager, who will begin work in August. One example is the “Rucksack Semester” idea, which would allow scholarship holders, after completing their own degree programme, to complete an additional semester in a different discipline as a way to acquire specific skills or competencies. We also want the degree programmes to establish their own formats, such as an interdisciplinary summer school series. Interdisciplinary and inter-university series, which might feature outside experts and different themes, are particularly attractive and effective formats. They create continuity and are sustainable in that way – something I consider very important.

Will you miss the scholarship holders?
My work in the department was exciting and, for me personally, a very enriching experience. I head off to Vietnam with many, many valuable experiences under my belt. I want to thank all scholarship holders for responding so imaginatively to our initiative and for following through with such commitment, for their enthusiasm, their contribution to all the events and for their willingness to contribute to the further development of DAAD’s programmes.  This combination of initiative, imagination and sense of individual responsibility is exactly what we will need in the future.

Gabriele von Fircks will take over the Development-Related Postgraduate Courses Department beginning 1 November. We will feature her in an upcoming profile.