Planning a birthday party takes plenty of preparation. That’s why several scholarship holders convened in Bonn in the middle of April – to plan the 25th anniversary celebration of the DAAD programme “Development-related Postgraduate Courses”. To mark the occasion, an international conference will be held from 31 May to 2 June in Bonn.

What have been the benefits of Millennium Express so far, and how can the programme be further developed? These were the questions up for discussion during the two-day network meeting. The scholarship holders addressed them in four separate workshops. They also brainstormed on new formats and ways to prepare future scholarship holders for their studies in Germany. “The university in Karlsruhe sent all of its scholarship holders a welcome package before arriving in Germany,” says Rocío Juliana Herrera. “It included information on where I had to register, for example, and where I could find affordable housing.”

Hands-on experience scores high
The scholarship holders first took a look back at the Millennium Express, which has been on the move since the fall of 2010. The workshop series, which took place at seven different universities in Germany, focused on issues such as food security, climate change and natural disasters. “The scholarship holders benefited most from workshops that demonstrated where theory can been turned into practice,” says programme head Anke Stahl. A prime example of this is the Dortmund workshop, where programme alum and spatial planner Johannes Horstmann spoke about his work in Haiti after the 2010 earthquake.

Another value-adding aspect of the series, as scholarship holder Nafisa Fyzullaeva pointed out, was its hands-on character from the ground up: “The best workshops were the ones that were organised by the students themselves – like the one in Flensburg.” Her opinion was shared by many of her fellow scholarship holders. 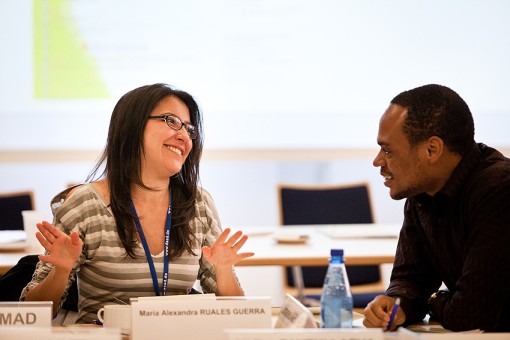 Engaging with Nobel Prize winners
The network meeting then turned its attention to the anniversary conference in Bonn, titled “Paving the way for change: Development through Education”. A panel discussion will bring scholarship holders together with the General Secretary of the DAAD, Dr. Dorothea Rüland, and the Alternative Nobel Prize winner Professor Anwar Fazal to discuss future challenges for professional training and research. The conference will also feature a number of workshops on a wide range of topics – from climate-driven conflict to tips for scholarship holders on how to apply their expert knowledge once they have returned home. A unique experience also awaits scholarship holders with the “Science Meets School” workshop, which puts them in the same room with local high school students to explore issues of food security.

Twitter wall: #DAAD25
Event Special: It’s also possible to take part in the conference virtually! Contributions from the talks held Thursday, 31 May, will be posted the same day on a Twitter wall. Questions and comments welcome! The hashtag for the conference is #DAAD25.