Up for auction: The Amazon

For the students enrolled in the DAAD’s development-related postgraduate courses, sustainability is an issue that demands more than just a scientific take. The students in the Master’s programme in Environmental Governance at the University of Freiburg took it to the stage, presenting a play on sustainability. 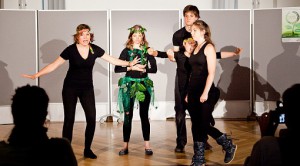 A young woman wrapped in vines and wearing a crown of flowers stands centre stage. She looks out into the audience in both innocence and fear as a man wearing a white shirt and tie talks out her merits: “The Amazon region is home to 20% of the world’s water fresh water reserves, which are just waiting to be bottled and sold! Let the bidding begin…” The auction gets underway but is disrupted by demonstrators, who are taken away and left to show their rage from the street, where they pound on windows from the outside.

The Freiburg students presented an unusual play as part of the Right Livelihood College Campus (RLCC) at Bonn’s Center for Development Research (ZEF). Titled “Setting the Stage for Sustainable Consumption”, the play presents one group’s journey toward greater environmental awareness while illustrating society’s ensnarement. Many of the amateur actors on stage come from developing countries and receive funding from the DAAD. 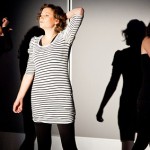 Each year students of the Freiburg programme are responsible for putting on student-organised event. The students select a topic and work on it over the course of two semesters. At the end of the third semester, the result of their work is presented to the public as part of the “Freiburg Forum on Environmental Governance”. Up until this year, the end result was always a scientific conference; the last one was held in February 2011 as part of the Millennium Express programme. The students from the Class of 2012 decided to take an entirely different, more personal, approach: How difficult is it to lead a sustainable lifestyle? A number of students decided to find out and created a documentary film about their experience. The play “Setting the Stage for Sustainable Consumption” was also part of the student project. 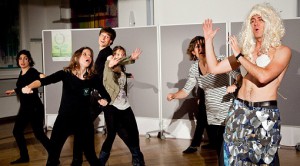 The play condemns the exploitation of farmers in developing countries at the hands of middlemen, pesticide manufactures and credit institutions and calls attention to the systems of power and corruption and the inertia of consumers. The students borrowed from a concept used in development work known as “scientific theatre”. The method was developed to increase audience understanding by infusing educational content with emotion. Many of the play’s scenes are simplified for impact – dispirited tomato farmers collapse under the increasingly difficult conditions of production; a lifeboat crew succumbs to the Sirens of Consumption, who lure them to their demise with iPods and flat-screen televisions. There was room for laughter, too. As Torben Floerkemeier from Germany points out, “Looking at environment issues from the scientific perspective can be a bit depressing. A little positive energy can’t hurt.”

While refusing to give simple answers, the play shows that part of the solution is asking the right questions: Can society be meat-free, with no air travel and no growth? If viable, who would want it? The creative projects also allowed students to explore their own personal “dilemmas” in regard to sustainability. “If I end up getting a job championing sustainability that requires frequent travel, I will have to fly and eat in restaurants,” says Griselda Bereciartu from Spain. “This kind of behaviour defeats my actual purpose.” 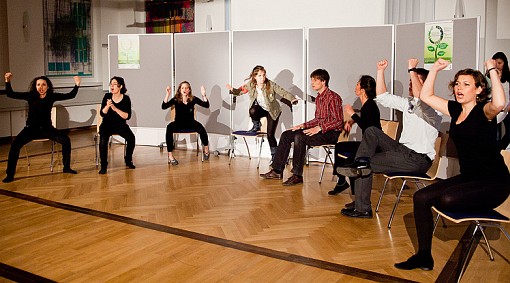 Empowering
The play ultimately empowered and encouraged the students. For Olga Weigel from Kazakhstan, stepping into a new domain and testing the limits of academia was a source of inspiration and guidance: “Take a chance and jump into something new. If you trust in yourself, it’ll turn out just fine.”