An American comedy, performed in English by young amateur actors from Pakistan at the University of Hohenheim in Germany. It was an uncommon evening of theatre, made possible by Usman Khalid, a DAAD scholarship-holder studying Agricultural Economics in Stuttgart.

A gunshot, a dull thud – Charley Brock, the second mayor of New York, collapses on his bed, covered in blood, just as the first guests arrive to celebrate his tenth wedding anniversary. They launch right into the gossip: Where is his wife? Was he having an affair? And why had the Japanese cook disappeared somewhere in China? From its dramatic opening scene, the play develops into an absurd comedy of errors. Written by American playwright Neil Simon, “Rumors” was brought to the stage in Hohenheim by Dramaline, the student theatre group from Pakistan.

A look into everyday life in Pakistan
Dramaline sent twelve amateur actors from Pakistan to spend a week in Stuttgart. Along with rehearsals, they spent time getting to know Germany and its people, and sharing insight into their own culture. “Germany’s image of Pakistan is informed mostly by negative news headlines,” says Usman Khalid. “They don’t know what everyday life is like.” The initiator of the exchange and also from Pakistan, Khalid is currently pursuing his Master’s degree at the University of Hohenheim.
Back in Pakistan, Khalid served as Dramaline’s stage director while studying Management Sciences at Lahore University. Here in Germany he sees himself as an ambassador for his home country and wants to communicate a more positive image of Pakistan. With this in mind, he contacted the University of Hohenheim’s student theatre group and proposed the exchange with Dramaline.

“We thought it was a great idea and jumped on it right away,” says Jürgen von Bülow, director of the German theatre group. To help organise the exchange, the university sought support from the Kulturkabinett (KKT) cultural society in Stuttgart, which helped find German host families for the visitors from Pakistan. Students spent the week rehearsing and taking part in a diverse cultural programme, including sightseeing in Stuttgart, a visit to the University of Hohenheim, and a get together with students at the Gottlieb-Daimler-Gymnasium secondary school. Here, the students took advantage of the unique opportunity to discuss Islamic culture and Islamic legal systems with their Pakistani guests. 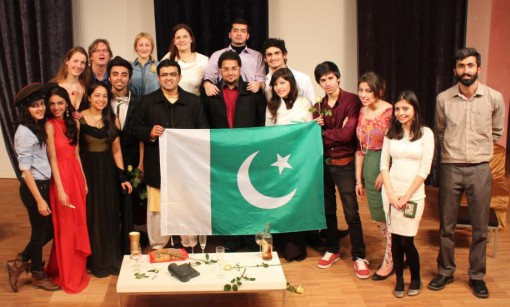 15-minute ovation
Dramaline, which organises national and international theatre festivals in Pakistan, regularly sends its actors on tour and had already visited several European countries. But this was their first time in Germany, so the jitters before the opening performance in Hohenheim were a bit more palpable than usual. “You’re familiar with your home audience,” said the 22-year old Yasin Asad. “But we didn’t know how the German audience would respond to the comedy.” As it turned out, the concerns were ungrounded. The house was full and the actors received a 15-minute, nonstop ovation after the show – a nice reward for the long trip from Pakistan and for DAAD scholarship holder Usman Khalid.