My experience during the COP 21

If you’ve read my previous posts, you know that some years ago I became interested in the issue of climate change. I was very fortunate to then work in Nicaragua (I am now back in Germany for a research project – more on this in my next post) following up on the negotiations taking place under the United Nations Framework Convention on Climate Change (UNFCCC). My role during the negotiations was as “observer”, representing the Nicaraguan organization for which I worked, as well as the national, Central American and Latin American networks which my organization was involved with. 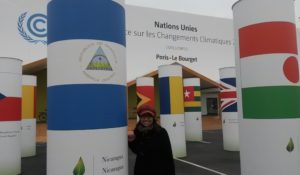 Rather than share with you my analysis on the outcome of the COP 21, I think it would be most valuable or interesting to share my personal experience during my participation in that hugely important conference, in which not many people have the privilege to take part.

As a representative of one of the 1,109 NGOs registered as conference observers, my role was to do just that: to “observe” the process. Only official representatives of the 196 UNFCCC parties (countries) – called “delegates” – have the right to negotiate and intervene during the various meetings that take place during the conference and UNFCCC related meetings. We, the observers, had access to some of the meetings to hear the arguments and positions of the various countries and/or negotiating groups. We could also attend a summary of what was discussed and agreed by delegates.

To influence the negotiation process and include the voice of civil society, it is important for us observers to have contact with official delegates. But how to influence an event of such importance, considering the total number of attendees  and the large number of activities and meetings held? The answer: work in networks. Networking plays a vitally important role in influencing these global processes.

As I mentioned earlier, my organization was linked to different networks at different levels. Prior to the COP, the various networks agreed on their positions and the expected outcome of the negotiations. Through the networks I could keep myself updated on the negotiations related to the issues I was interested in, and could also help to present the proposals previously agreed upon. I should mention that tracking and analyzing all the information circulating during the negotiations is a daunting and sometimes impossible task.

Through networking, and as coordinator of one of the regional nodes of the largest network of civil society organizations within the UNFCC, I had the opportunity to participate in meetings with the presidency of the COP 21 – led by Laurent Fabius, Foreign Minister of France and President of the conference – and with high-level representatives of the European Union. Without the involvement and work with the various networks, this would have been impossible.

Being involved in the climate change negotiations has also allowed me to expand my network. More importantly, it has allowed me to collaborate and share with amazing people who are working for a better world.

After following the negotiations for more than three years, attending three COPs, and several inter-sessional meetings, I confess that the COP 21 did not fulfill my expectations. The Paris Agreement falls short of what is needed to build more resilient societies and to stop the climate crisis that many countries are already facing (mainly developing countries such as mine).

The COP 21 helped me, personally and professionally, to confirm that in unity there is strength and that, as organizations and as individuals, we have to organize to be able to influence or present our positions in international processes. In that way, our influence will be greater. Therefore, work should not stop or slow down just because we finally have a new climate agreement; instead, it must be intensified so that, in the near term, governments increase their commitments to providing answers to all the communities and countries where climate change is not a future issue, but a reality faced every day.

Please find below the analysis of the Paris Agreement that I wrote on behalf of the SUSWATCH network (in Spanish):
http://www.humboldt.org.ni/sites/default/files//Balance%20COP21%20SUSWATCH.pdf