Africa as a largely under-industrialised continent was the focus of a practice-oriented, interdisciplinary workshop in Bonn: “Natural resources based rural development in Africa”. Students of the Development-Related Postgraduate Courses discussed the feasibility of their own ideas. 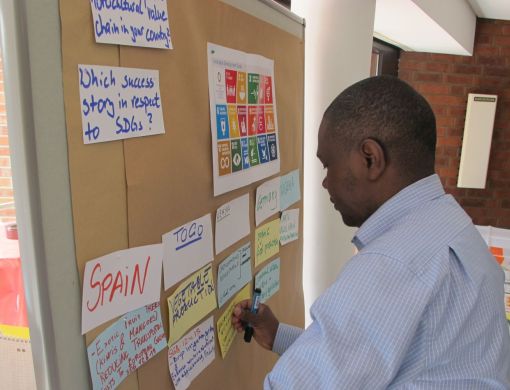 One idea: Does the cultivation of mangoes contribute to a sustainable agriculture in West Africa? © Meik Nowak/GSI

“It was clear that the focus was on Africa’s economic survival, and this sense of urgency was carried over into the debates”, says Dr. Meik Nowak, who is Adviser at the Bonn Gustav Stresemann Institut and was in charge of the workshop. 35 participants from 19 countries attended, among them many scholarship holders and students from the DAAD’s Development-Related Postgraduate Courses. The Gustav Stresemann Institut hosted the event in Bonn in cooperation with the German Association of Postgraduate Programmes (AGEP). The workshop was funded by ENGAGEMENT GLOBAL on behalf of the BMZ.

“We wanted to create a space in which people from the North and the South could learn from and with each other, define common problems and most importantly work out solutions,” Nowak says, explaining the scope of the workshop. For this purpose, each participant brought an idea or a study project that he or she then presented for debate. Three ideas were chosen in the course of the event and analysed extensively and interdisciplinarily by the participants with the help of the moderators and workshop leaders.

Sustainable Agriculture
One example is the idea of cultivating mangoes in West Africa. This fruit is not indigenous to the region, but climate and soil conditions allow for its cultivation. “Mango trees are suitable for reforesting over-exploited land”, Nowak mentioned one of the arguments in favour of the fruit’s cultivation – and the participants discussed under what conditions such production would make sense in West Africa. One of the questions was whether the mango could actually help in regions where people sometimes suffer from hunger and how to deal with exporting the fruit. Or whether it would make more sense to provide farmers with more training so that they could secure their livelihoods with traditional crops.

Close to Practice
Both the content and the spirit of the three-day event impressed the students and young scientists. “I think learning how to tackle development projects was a valuable experience”, says John Paul Okimat from Uganda, who studies Tropical Forestry at the TU Dresden. “The energy, lively atmosphere and forward-looking perspective when we spoke about forestry and food production, water and soil conditions were also inspiring.”

The intense discussions, the advancement of project ideas up to the point where they are ready to be implemented, and the networking opportunities made the workshop a success – even when analyses showed that the three chosen projects could not be implemented immediately. “A lot of work still needs to be done”, summed up Meik Nowak. “But it’s become clear what has to be adjusted.” 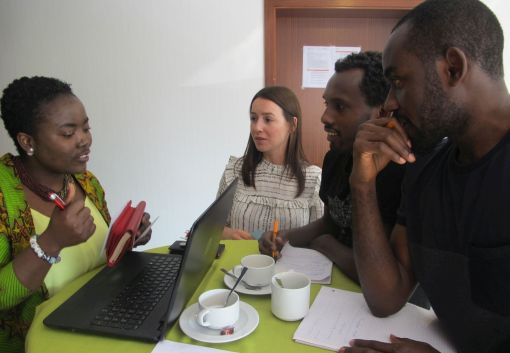 Learning from Examples
The participants whose study ideas were not in focus benefited too, according to Nowak. “They can transfer processes and results to their own projects”. Diana Naikoba from Uganda, Master student in Agricultural Economics at the University of Hohenheim, said that this works well in her case. “Food security, poverty, rural communication, political processes in the agricultural sector – many topics that we discussed are extremely relevant to my work.”