“Met ner pappnas gebore, dr Dom in dr Täsch, han mir uns jeschwore, mer jon unsre Wääch…” – is that really the German language? And if so, what does it mean? A hint: February is high season for carnival in Germany.

Loud colours, bright costumes and painted faces … depending on where you are in Germany it’s called “Karneval”, “Fastnacht” or “Fasching”. In English it means “carnival” and in practice it means lots of partying, drinking and dancing. It’s known as the fifth season of the year and, especially in Rhineland, it’s a big deal and very spirited affair. “I think it’s one of those rare opportunities for Germans to just let go and try to have as much fun as possible,” says Tania Yaoska Guillén Bolaños, who has spent the last year and a half in Cologne studying Technology and Resource Management in the Tropics and Subtropics. A native of Nicaragua, Guillén has already experienced Cologne’s legendary carnival festivities first hand. 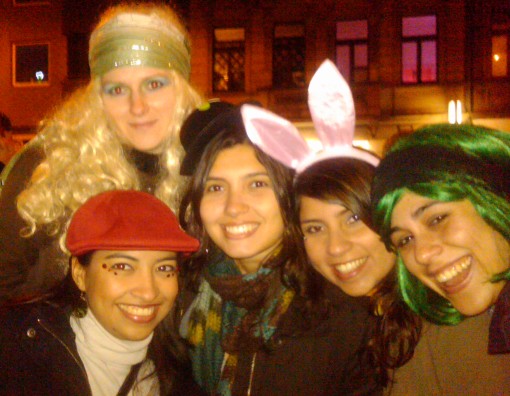 Every year on November 11th at 11:11 a.m., the new carnival “session” begins. From then until the beginning of Lent in early spring, the many carnival associations put on evening events called “Sitzungen” (“sessions” or “meetings”).  These “meetings” invariably feature a good amount of political and social lampooning as well as lots of laughs, drinks and dancing.  Myo Min Latt from Myanmar, who is currently studying at the university in Cologne, definitely plans to join in the fun this year: “I don’t yet know what costume I’ll wear for carnival, but I know I’ll be painting my face.”

The street carnival
The highlight of the carnival season are the “jecken Tage”, seven days of intense revelling, from “Weiberfastnacht” (the Thursday before Fat Tuesday) to “Aschermittwoch” (Ash Wednesday), when the carnival celebrations take to the street. Cowboys and clowns, princes and princesses, tigers and giraffes – any kind of costume is allowed, especially if it’s colourful, happy and loud. “Alaaf” and “Helau” are the standard carnival cries heard on every street corner. Heinz Wacker, honorary president of the German Carnival Association once said: “Carnival is like a huge peaceful demonstration. Instead of throwing things at the police, people actually kiss them.” Tania Guillén is a big fan of the street carnival: “The city is full of people, full of colour and full of people doing funny things.” 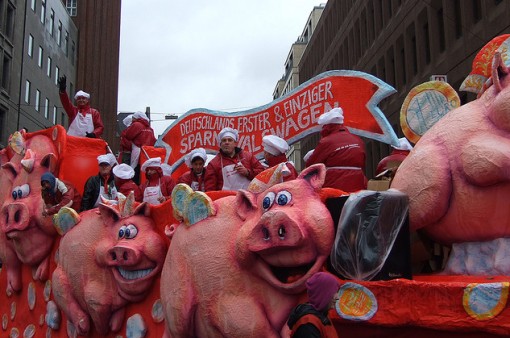 The “Rosenmontagszug” (Rose Monday parade) in Cologne is world famous. It’s 7 kilometres long, includes around 270 parade floats with fun designs and roughly 130 marching bands. Over 10,000 people are involved in the parade and another million “Narren” (carnival revellers) line the streets to cheer. Kids love the carnival parades for the “Kamelle” (candy) that gets thrown down from the floats into the sea of onlookers – in Cologne it’s about 150 tons of the stuff each year.

Carnival in other parts of Germany
The “Jecken” (carnival enthusiasts) can be found not only Rhineland, but in other regions throughout Germany as well. The city of Mainz, for example, in the state of Rhineland-Palatinate, is also well known for its carnival. In Wasungen (in Thuringia) carnival has been celebrated since 1524, and there is also a long tradition of carnival in southern Germany, where it is known as “Fastnacht”. Here the carnival season doesn’t begin until January 6 and it is regarded more as a ritual to drive out the winter. Since carnival is traditionally a Catholic celebration, there are only a few northern German cities that put on carnival parades. Still, no matter what your location, the revelry ends on Ash Wednesday – 40 days before Easter – and Lent, the period of fasting, begins.

The solution: The sentence at the beginning of the article actually is in German – more accurately: the Rhineland dialect “Kölsch”.  It is from a famous Cologne carnival song. A more recognisable German would be: “Mit einer Pappnase geboren, den (Kölner) Dom in der Tasche, haben wir uns geschworen, wir gehen unseren Weg…” (in English: “Born a fool, the Cologne Cathedral in the back pocket, we’ve sworn  to go our way…”)