From 1 to 8: How close are we to achieving the Millennium Development Goals? 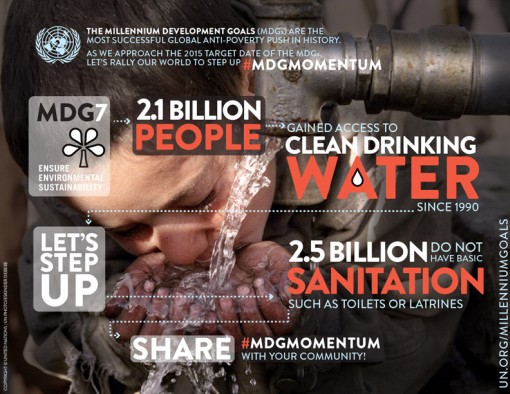 The ins and outs of sustainable investing
Débora de Mendonça Lage is enrolled in the Peace and Conflict Studies programme at the Otto-von-Guericke University Magdeburg and currently writing her Master’s thesis.  Once she has completed her degree, the Brazilian would like to work for an international company or an NGO that is interested in issues of sustainability.

Millennium Express: What kinds of problems arise from resource scarcity?
Many wars – just like the one in Iraq – are started out of the greed for oil, for example.  There is always another “official” reason, but it’s really about the oil.  Even though we now have the technology to generate non-fossil energy, oil remains one of the cheapest and most coveted natural resources out there.
Resource scarcity most often leads to internal conflicts, however. People are forced to give up everything they have because there is not enough to eat where they live. Floods or prolonged drought – brought on by climate change – lead to bad harvests. Pollution exacerbates drinking water and food crisis even further. These are problems faced by nearly all developing and emerging countries, such as Uzbekistan, China or Brazil.  The countries have not yet learned from the mistakes of others.  Even when the population rises in protest, the government crushes the opposition.

Millennium Express: How can these problems be solved?
In our Master’s programme, we take a hard look at both the risks and consequences of potential solutions. We examine approaches that have worked in the past and consider ways in which they can be transferred to other country contexts.
For me there is only one long-term solution:  Countries have to generate and use their energy more sustainably.  The problem is, however, that it doesn’t pay off in the short term for these countries to invest in sustainable energies – it’s simply too expensive.  That is why Brazil continues to build dams, even though there is plenty of open space for wind turbines and solar plants.
Foreign companies need to step up. Bavarian companies are helping to finance the construction of the largest dam on the Amazon by paying for both the machinery and insurance.  Why aren’t they investing in renewable energies in Brazil? That would be the smarter thing to do – that is, if these companies were truly interested in helping developing countries…

Millennium Express: What can individuals do on the sustainability front?
A lot is already being done in Germany through recycling, for instance.  Plastics and paper can be used over and over again. Recycling not only avoids the build-up of mountains of rubbish, but helps conserve resources.
Another thing we can do is avoid throwing out food.  They have a great concept in the Netherlands – supermarkets are selling food-to-go that has been prepared by on-premise restaurants using near-expired food. The idea has become quite popular and more and more people are buying it!  It’s a model worth trying in Germany.