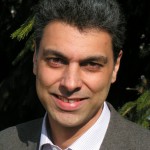 Either empty plates or bowls filled to the brim but at exorbitant prices – for industrialised nations perhaps impossible to fathom, but Matin Qaim, Professor for International Food Economics at the Georg-August-Universität in Göttingen, has his eye on the future and sees it otherwise. In just 40 years the global food supply could very well take a turn for the worse, especially for the world’s poorer populations in developing countries. Matin Qaim, a guest speaker at the upcoming workshop in Hanover, gives us a sneak peak at his ideas about fighting world hunger – and winning.

Are our food production systems able to feed the world population?
Matin Quaim: Yes, but not for long. We will be looking at considerable shifts in both population and income in the near future. By the year 2050, our demand for both food and livestock feed will increase by some 70 per cent. Also factoring into this development is the fact that more and more agricultural products are being put toward the production of bioenergy. The more expensive energy gets, the more attractive this new energy source becomes. Overall demand could increase by 100 per cent in the decades to come.

Can this demand be met?
Statistics are already showing a growing discrepancy between supply and demand. While demand continues to grow at an annual rate of 1.8 per cent, production – increasing at a rate of just 1.3 per cent each year – is unable to keep pace. One consequence is the rising cost of food. This a disastrous trend for the developing world. Poor people already spend 70 to 80 per cent of their income on food.

How can we stop this trend?
People in industrialised countries can influence demand by relying less on bioenergy, throwing away less food and eating less meat.

Are you saying that vegetarians are more sustainable members of society?
Statistically speaking, if we all became vegetarians, we would be able to feed not 7 billion but 15 billion people. This is based on the fact that it takes ten kilos of grain to produce just one kilo of beef. This kind of argumentation makes little sense, however, because meat has great nutritional value and should be made available to everyone for consumption. This said, at 90 kilos, the annual per capita consumption of meat in the industrialised countries is too high. According to the German Nutrition Society (Deutsche Gesellschaft für Ernährung e. V. / DGE), one-third of this amount would be sufficient. To put this into perspective, the annual per capital amount of meat available to people living in India or Africa, for example, is less than ten kilos.

So eating less meat here would mean more food on the table for an African family?
Generally speaking yes, but it is more than just an issue of distribution. By the year 2050, there will be one billion people living in the world’s wealthy countries and eight billion living in today’s developing countries. Decreasing our food intake would have little effect on our ability to cover the overall demand. Changes are therefore required on the supply side.

What would that entail?
More effective farming. Land, water and nutrients are limited resources. The only sustainable way to move forward is to increase production while reducing the use of resources. And we need the right technologies to do this.

How can developing countries afford the necessary technologies?
What a small farmer in Africa needs more than a tractor, for instance, is a type of corn suited for the type of soil he is farming, or improved technologies for post-harvest handling. Innovation is not necessarily limited to technology per se. Better roads and transport infrastructures, agricultural consulting services or access to small loans are also ‘innovations’ that can help increase productivity.

Can the problem of world hunger be solved?
Yes, in a two-fold way. 80 per cent of the people suffering from hunger live in rural areas. Increased productivity would lead to more food at more affordable prices. Higher yield harvests also mean more income for the farmers, which puts them in a better position to feed themselves and their families.