Taking the Role of Climate Politician

What goes on at international conferences? Why are negotiations frequently so difficult? When is a consensus reached? These questions were the focus of an interactive planning game in Berlin, in which students from five Development-Related Postgraduate Courses simulated a UN Climate Conference. 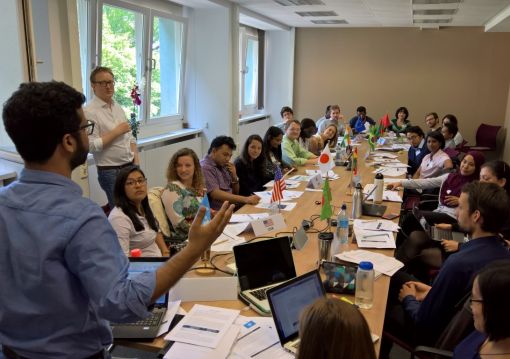 First AGEP Simulation Game: The close to 30 students found themselves at the climate conference that will take place in Bonn this November © Robin Pass

“Successful negotiations depend on winning the trust of the other participating parties. But it’s bitter when the resistance of one delegation or country negates all that has been achieved.” This is how Tonny Nowshin summarises her experiences in the planning game on the future of international climate policy. Nowshin comes from Bangladesh and studies in the Master programme International Development Economics at the Hochschule für Technik und Wissenschaft – University of Applied Sciences in Berlin.

The Setting: Nine Countries and the UN
The umbrella organisation Association of Postgraduate Programmes with special Relevance to Developing Countries (AGEP) invited the students to participate in the planning game; the event marks the launch of the “AGEP Simulation Games”.  At these events, students slip into the roles of politicians from assigned countries and discuss real problems in world politics. At the début, the close to 30 students found themselves at the climate conference that will take place in Bonn this November. They represented nine countries as well as the United Nations. The simulation followed a blended learning approach. In a two-week online preparatory phase, the participants had to work out a draft for the final resolution of the climate conference. Afterwards, they negotiated for an entire day in Berlin using their drafts and ideas as a basis.

The Challenge: Negotiating and Compromising
“The planning game shows the students first-hand how difficult it is to find solutions for complex challenges. At the same time, they experience what it means to debate various concepts and work out compromises”, explains Robin Pass, Network Coordinator of the AGEP. The negotiations in Berlin became difficult, and due to time pressure not all of the articles of the resolution could be drawn up. Although the rough draft was agreed upon by the majority of the countries, the negotiations broke down. The representative of the USA refused to sign the negotiated resolution in the end. 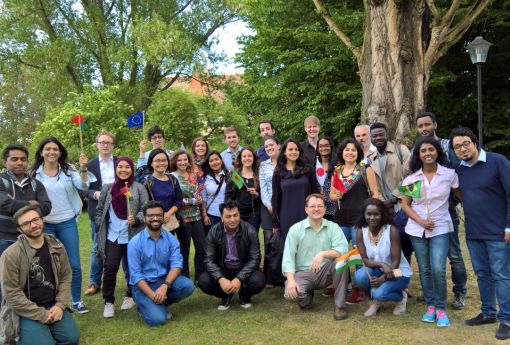 The Impact: Perceptible Interactions
“Planning games make a sustainable impression. These interactions and group dynamics are not as easy to comprehend in a lecture”, explains Tonny Nowshin from her experience. “Now I can really commiserate with politicians who are simply trying to stand up for the interests of their citizens”, says Nga Le Huyen, student in the programme Environmental Governance at the University of Freiburg. The difficulty of arguing on the basis of scientific facts, although this is often pleaded for, was an important insight for the Kenyan. “We spent the majority of the negotiations discussing scientific facts – without success. When we ignored the facts, we quickly reached agreements.”
Robin Pass is glad that the new format was so well received by the students. “The participants would have liked to have had more time to negotiate informally as well”, reports the Network Coordinator.

A theme for the next “AGEP Simulation Game” – according to the organisers – could be cross-border resource management. The conflict over resources is a hot topic worldwide and requires great negotiating skills.